Information about the MidCoast region, from Ellenborough Falls to the north shore of Port Stephens, and from the Great Lakes to Barrington Tops

For a basic description of the MidCoast region, including the map, we draw on the profile of the MidCoast Local Government Area produced by .id (informed decisions) for MidCoast Council. 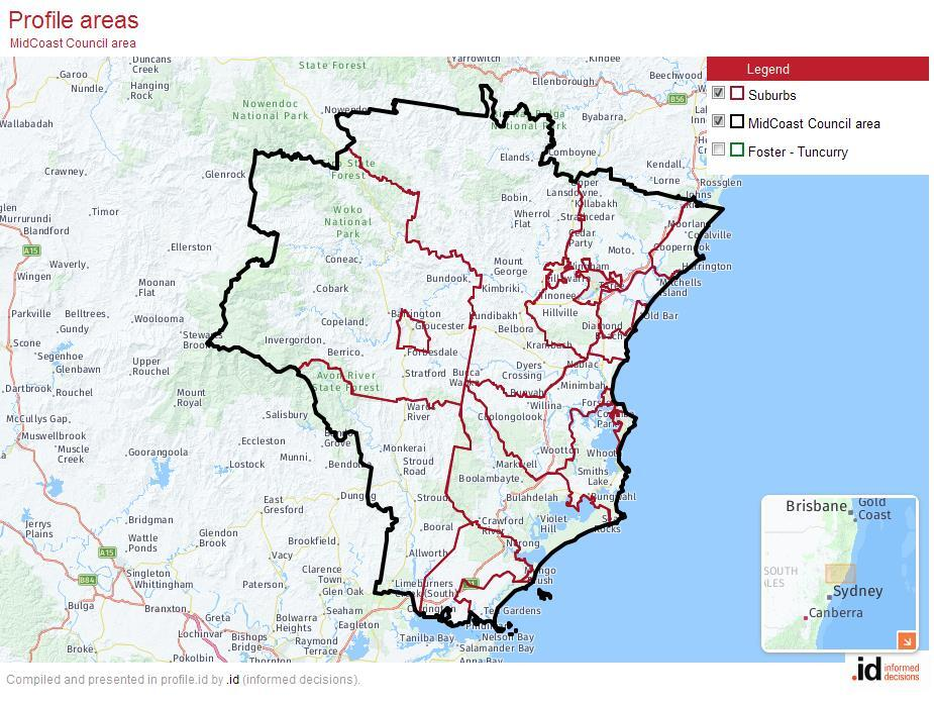 The original inhabitants of the MidCoast Council area are the Biripi and Worimi  people. We acknowledge the traditional owners and pay respect to their Elders past and present.

Located on the mid-north coast of New South Wales in the State's Hunter Region, the total land area of the MidCoast Local Government Area is 10,060 square kilometres. It has an Estimated Residential Population for 2020 of 94,395. The population is forecast to grow to 113,147 by 2036.

European settlement began in the 1820s, with sheep farming and timber-getting as early occupations. Stroud was built with convict labour in the 1820s and 1830s as a company town for the Australian Agricultural Company. Wingham was established in 1843 as a river port on the Manning, and Gloucester was surveyed in 1855. In the decades since then, development has been spurred on by factors such as successes in the dairy farming, timber milling and ship building industries, the discovery of gold at Copeland, and the opening (in 1913) of the north coast railway line .

​Since the 1960s, improved access and increased tourism has led to continued growth in the coastal areas in particular. The rainforests in Barrington Tops National Park are part of the Gondwana Rainforests of Australia World Heritage Area, declared in 1986.

Rivers connect our landscape and communities

​Chances are if you’re a gardener you’re tuned into not just your own patch, but also the landscape and waterways around you. Every garden is part of a wider catchment that feeds water into our rivers, known as bila in the local Gathang language. These rivers are the lifeblood of our community. From the mountains to the sea (Balgarr-abirang-Gurrwa-gu), from freshwater to saltwater (Bathu-garibang-Girambit-gu) - the rivers connect our landscape and our communities. ​
Riparian zones, the interface between land and water, are particularly biodiverse. Some animals like the platypus are riparian specialists, while others such as bass and the Manning River helmeted turtle depend on inputs from the riparian zone for food and shelter. The shady, cool and moist habitat of riparian zones and availability of water provides crucial refuge for terrestrial wildlife such as koalas to minimise stress during drought and heatwaves. This function will become more important as the climate changes.

Our precious freshwater rivers provide water for drinking, gardening, stock and irrigation. We love the cool water and tranquil scenery, feeling a cultural and spiritual connection. They flow into the beautiful coastal lakes and estuaries where fresh and saltwater meet. Estuaries are the 'nurseries of the sea'. Their sheltered waters provide vital nesting, breeding and feeding habitats for many species of fish, shellfish, aquatic plants and birds. All these values depend on healthy ecosystems and clean water. 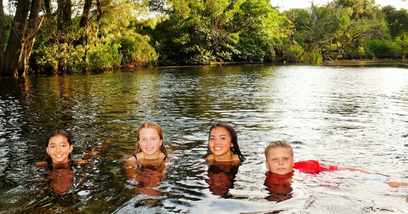 Kids' river, Gloucester (photo: Louise Duff)
​MidCoast Council has worked together with stakeholders to develop management plans for each of our catchments, the most recent being the Manning River Estuary and Catchment Management Program. These plans guide collective action to improve the health and resilience of our rivers and estuaries, taking a whole-of-catchment approach. Our vision:
​
Rivers, tributaries and the estuaries give life to our community, connecting the mountains to the sea. Together we manage catchments holistically and respond to a changing climate - safeguarding environmental, social, cultural and economic values.
​​Maintaining native vegetation, especially on riverbanks, provides habitat for aquatic fauna, prevents bank erosion and takes up nutrients before they reach the water. Minimising the use of pesticides helps improve the productive life of the soil, and keeps waterways clean. ​

Climate change and the Midcoast

Bulahdelah
Bulahdelah is the western access point to the Myall Lakes National Park, which is the largest natural freshwater lake system on the NSW coast. The name (most likely a Worimi Aboriginal word referring to 'the meeting place of two rivers') was first given to the mountain to the east of the town, called Mount Bulladella by the explorer and surveyor John Oxley in 1818.  The area around the mountain was declared a state forest reserve - Bulahdelah Mountain Forest Park - in 1979. Although it is now bypassed by the Pacific Highway, the town remains an attractive place for people to stop on their journeys north and south due to its many services and shops, and to its lush surrounds. 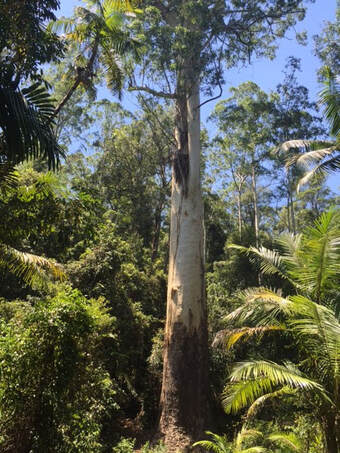 Grandis Flooded Gum (photo: Ron Woods)
One of the district attractions is the Grandis Flooded Gum. At a height of 76.2 metres, this 400 year-old Eucalyptus grandis is the tallest publicly accessible tree in NSW. Soaring up above the forest canopy, with a diameter of 11.5 metres at ground level, it is a sight to behold.

​The Lakes Way continues on from the Grandis turnoff to pass through the forests around Bulahdelah, including in the Wallingat National Park. On the way to Forster, there is a turnoff to Seal Rocks.  ​

​Bulahdelah is also famous for its Clydesdales. Going on a farm tour to Bulahdelah Clydesdales, you can learn more about these gentle giants that were so vital in the development of rural Australia. In town, the old courthouse (1886), now housing the Bulahdelah Historical Society, is well worth a visit. Strolling along the Myall River is a pleasure in itself.

Copeland
Copeland is a small community with a big history. In 1875, red cedar cutters - who had been logging the area for decades already - discovered gold in this hilly area not far west of Gloucester. The gold rush area soon became known as Copeland, named after Henry Copeland (1839-1904), a politician and mining expert. Visitors can today go on guided tours of some of the old mines at Copeland, which can be booked at online with National Parks of NSW. The prominent feature of the district is Copeland Tops, part of the foothills of Barrington Tops. 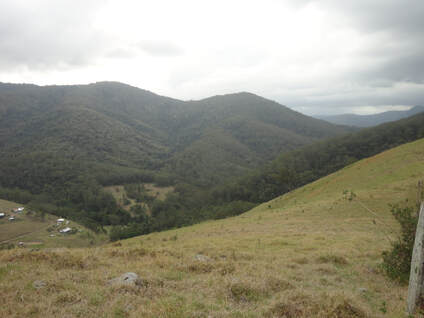 Looking towards Copeland Tops from the north-east (photo: Ron Woods)
The Copeland Tops State Conservation Area occupies the major part of this natural feature, and it contains some magnificent bushwalks within accessible tracts of dry rainforest. A feature of these forests is the prominence of epiphytes, such as bird's nest ferns and orchids, and there are also lovely stands of Australian grass trees (Xanthorrhoea sp.). The settlement of Copeland, much reduced in size since the gold mining days, lies at the base of the Tops, and houses are pleasantly spaced out along Copeland Creek. The closest shops are in Barrington and Gloucester, a short drive away. The district also boasts several established farms and acreages .
Powered by